In the olden days, lines of quoted text were prefaced by the > character (greater-than), like so:

That system worked OK when everyone used Unix mail programs like Pine and Elm via terminal software. But even then, if the original line of text were unusually long, the results could be messy:

With graphical E-mail programs like Eudora, if you resized the window, text would flow in an equally ugly way.

Things get worse when quoted text is itself quoted, because each level of quotation added a > character and possibly also a space. Inevitably, over time you ended up with quoted text where not every line began with a > even though it’s actually a quoted line. The results were hard to read and unattractive.

So are you saying that f=f text is easier to read and more attractive? What’s involved?

Here’s what goes on. We’ll skip one technical detail in this explanation. (Don’t worry, you can read about it in the documentation section.) A mailer program that understands f=f suppresses the display of > characters. They’re still there, only hidden.

See the illustrations below. The first image shows a wide window, the second a narrower one. Note that the text in both paragraphs (the first of which is quoted two levels deep and contains an HTML bullet) reflows nicely. 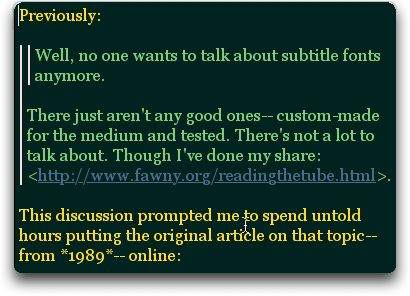 Well, that’s not how it works for me. I get mail all the time where, when I make the window smaller, I still see weird linebreaks.

The system works best when the text originates with a mailer that produces f=f text. Other mailers place hard carriage returns at the ends of lines, which, for a technical reason we’re not dwelling on here, even an f=f mailer has to respect.

If you receive a message from someone using, say, Pine or Elm (Message 1, we’ll call it), and then add some of your own text and forward the whole thing to your friend who also uses an f=f mailer (Message 2), when your friend resizes the message you are still stuck with the Message 1’s hard linebreaks. But when your friend replies to your message, the original text you typed in Message 2 will flow nicely when you resize your friend’s message or add or delete text.

In other words, f=f works best when the entire chain of a message uses f=f mailers.

Doesn’t flowed text gum the works for older mailers?
Nope.
Why not?

Because f=f does not really alter the text of your message. (There is a tiny alteration, but we’re glossing over that technical detail.) Actually, what it mostly does is alter the so-called content-type declaration in your message.

Most E-mails you will receive (mail from spammers is usually not in this category) will contain a hidden header that tells the receiving mail program what kind of text to expect. A very ordinary plain-text E-mail with no formatting at all (no HTML, no flowed text) might have a content-type of:

So an older mailer that doesn’t understand flowed text doesn’t have to; it can simply ignore the format="flowed" declaration in the header.

So what does a flowed message look like in an old E-mail program?
Like any other message: Quoted text is shown with preceding > characters. The recipient will never know the difference.
But doesn’t f=f add a style or something to my E-mail?
No. Flowed text is not a style in the way that HTML is. It is merely a way of displaying quoted text.
Are you saying that f=f has nothing to do with HTML?
No. Nothing. Format=flowed applies solely to plain-text messages. HTML messages already have something functionally equivalent to f=f: the <BLOCKQUOTE> element, which does what it says: It quotes blocks of text. When f=f mailers that also can handle HTML encounter <BLOCKQUOTE> text, it’s usually marked up with the same excerpt bars we’re familiar with from f=f. Format=flowed isn’t actually at work there, but since <BLOCKQUOTE> text flows nicely when you resize a window, the effect is the same.
If I remove HTML from a message, what happens to f=f?
In compliant mailers (like Eudora), only the HTML disappears. Text formerly quoted with <BLOCKQUOTE> will now be quoted with f=f, and will look fine in any recipient’s mailer.
Well, I have a hard time believing that, because when I send mail to my friend who uses Pine, he keeps complaining that there are all these HTML tags.
Your mailer program may be inserting HTML tags without informing you. HTML is the default mail format for many versions of Microsoft Outlook, for example, and is hard to turn off. But it has nothing to do with f=f. (Remember, even having one word in a message that’s bold or underlined or in a bigger font or in any specific font is enough to turn the whole message into HTML.)
How do I turn HTML off?
In Eudora Pro, select the text you want plain and press Option-Command-T (in Macintosh) or Control-spacebar (in Windows). Flowed quoted text will stay flowed. In other mailers... well, there’s a whole Web page devoted to this topic.
Whose brilliant idea was it, anyway?
A posse of engineers at Eudora, spearheaded by Randy Gellens.
What programs support f=f?
I see the excerpt bars in mail from Yahoo and from Outlook from time to time.
I do, too, and I was convinced that some versions of those mailers might be supporting f=f without any kind of official confirmation. In fact, though, you only see excerpt bars in HTML messages. Plain-text messages from either mailer still use > characters. In neither case is f=f at work.
Is there some kind of problem f=f is supposed to fix?
The official response from Eudora is “not really” (or the other, more smarty-pants official response: “Yes – embarrassing display of quoted text”), but in reality f=f was developed in part in anticipation of a future full of PDAs and cellphones with tiny displays that cannot afford even the one or two characters of standard quoting (the > character, possibly followed by a space). Reformatting of text sent from traditional personal-computer E-mail programs is an inevitability there. (This makes sense from the standpoint of corporate synergy. Who owns Eudora? Qualcomm. What else does Qualcomm make? Among other things, PDAs and cellphones.)
So you’re saying there aren’t any reasonable objections to f=f?
No. A few have been raised.
The excerpt bars are really annoying. How can I turn them off?

You can turn off f=f within Macintosh Eudora, though there’s no reason to do so. Copy these characters into the body of a message:

Then Command-click that text. (You will thus have engaged one of Eudora’s hundreds of semi-secret configuration codes. You can get a list of those codes via E-mail by sending a message to a special address at Tidbits.)

In Windows, copy these addresses into a message and Control- click:

Can we convert old E-mail to f=f?
Use the Send Again command in Eudora. (I’ve found this doesn’t actually rewrap lines, though.)
I’m still iffy on those excerpt bars.
They truly are an improvement over > characters. A Eudora potentate puts it this way: “People should think of them as an attribute of the paragraph instead of a character on a line, and that way they become very helpful in making it easier to edit quoted material. Just delete, and the line reflows nicely. Hit Return (to add your own text) and it all just works.”
Any useful commands I ought to know about?
According to a high-ranking Eudora nabob:

Along with the increased emphasis on excerpt bars comes better tools for dealing with them. Two new commands (to quote and unquote, Command-apostrophe and Option-Command-apostrophe) have been added to add and remove levels of excerpt. We believe that with these improvements, editing quoted material (whether to trim it or to respond to individual sections) will be much more convenient than it ever could have been using fixed quote characters.

Where do I find the really hardcore technical documentation for f=f?
Here:

Thanks are due to Steve Dorner, Randy Gellens, and Greg Brown of Eudora, though they have no connection to this f=fAQ and didn’t write anything that wasn’t attributed as such.